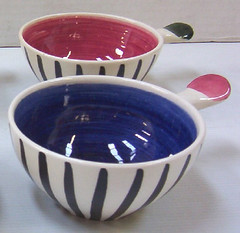 This small dish with bird decoration made by the Guy Boyd Pottery sometime between 1952-1964 is another of our purchases from the Shapiro auction in Sydney last weekend.

Shapiro is an up-market auction house with a double shop front on Queen Street in Woollahra. It runs seasonal auctions specialising in 19th and 20th century fine and decorative arts. The auction we attended was devoted to Australian art pottery with well over half the lots coming from a single collection. An illustrated catalogue is still available online.

A Marguerite Mahood brush-tail possum sold for a record price for Australian art pottery, going for $23,400. Other prices realised were sometimes above, sometimes below estimates. This brought out the bargain hunter in us, hence the Guy Boyd dish (lot 117, estimate $50-70, hammer price $30, total price with premium $36). Our limited budget precluded any similar acts of speculation but one dealer who had driven up from Victoria took back a number of pieces to re-sell to the Melbourne market.

A camera crew from ABC television’s The Collectors was there, filming the whole auction. I will be interested to see which pieces take Justin Murphy’s eye. Some of the contributors to the book Australian Art Pottery 1900-1950 were also there, possibly to acquire a piece by a favourite maker or to mourn at seeing a collection dispersed or to marvel at some of the prices realised. (The publication of a book can have a significant impact on prices according to this article about the Australian pottery market.)

The auction included quite a few works from the 1960s onwards. These engaged our particular interest but we find ourselves increasingly able to appreciate work from the earlier period. The term ‘art pottery’ itself embraces a wide range of makers. Merric Boyd, the quintessential artist potter, and Remued, a commercial pottery, can both be seen as making art pottery, even though pieces like the wall pocket at lot 4 (Remued 15-10) are from production lines.

We were least interested in the Australiana figures in the auction but Grace Seccombe’s red breasted finch (lot 23) was surprisingly beautiful. And when we saw lot 36 fetch a hammer price of $450, we suddenly realised that there was a William Ricketts face plaque just like it in the family. David has since rescued this from his mother’s garden.

Back home, our Guy Boyd dish proved to be less of a bargain than we had thought, with a bruised rim that other potential buyers must have noticed. However, it is nice to have it around and we may be able to recover our investment on eBay sometime in the future.