Mystery potter #34 turns out to be Ian Rowe,a potter trading as Roweshill Pottery in Whittlesea, VIC, from 1982 to 2012. 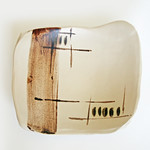 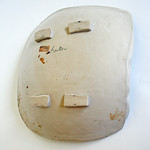 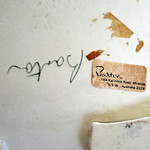 This pale stoneware bottle has a matt glaze in shades of umber, green and ochre over a heavily incised decorative surface.  It is 25 cm tall and well-proportioned with a flat base, slender neck and everted lip. I particularly like the verdigris effect of the mottled colouring and the way the stylus has been used to animate the patterned areas that flow around and up the sides of the bottle like an ancient frieze.

We bought it through an online auction as part of a lot that also contained a Wanda Garnsey vase.  Not reading the description of the lot carefully enough , I thought that this was the Garnsey until I had unpacked the box and examined the marks.  It was the vase that was impressed ‘WG’ while the mark on the bottle is an incised ‘SS’.

While a lot of ‘SS’ potters use their initials to mark their work – Steve Sheridan, Suzanne Startin and Shirley Storey to name a few – none that I have recorded are in this incised form.

Amongst the pots that I rediscovered when unpacking boxes for our new exhibition was this three sided bottle with turned neck. It is glazed a satin black with a diagonally-positioned anamorphic chequerboard square on two sides. We have another work by E. Boak in our collection equally playful in its design. It is a small bowl shaped like a fish, with sponged and airbrushed colours. I guess these date from the eighties or early nineties but I haven’t been able to find any mention of the potter.

It is sad to see a pot that has gone through hard times; and even sadder if it has suffered under your own hands. This anthropomorphic teapot has been with us for over twenty years and during that time it has been broken three times, losing its handle, the tip of the spout and the knob on the lid. Each time we’ve picked it up, brushed it down and put it back on the shelf. It is a little like one of those pets you see, still loved and cared for by its owners in spite of tattered ears or missing limbs.

Our gallery is in complete dissarray at the moment, as we set up next season’s exhibition. Everything that was on display must find a home in the workroom or the house, or be boxed up and relegated back to the container.  As part of the process I resolved to discard anything that was too damaged to sell. but somehow I couldn’t write off this teapot.

After all the rough treatment, you’d think we could at least remember where and when we bought it and who made it, but no. The incised mark is difficult to decipher but perhaps reads ‘PLS’.

David and I have been doing our best not to buy any pottery over the last month so that our books will balance at the end of the financial year. Luckily, we can always explore what we have packed away in the container to get a fix.  This well-made stoneware colander with dark red and black glaze came out of a box I had opened to photograph some Klytie Pates for the online shop. The mark on the base is an impressed house on stilts. I haven’t seen any other work in this style, but I imagine the colander would have been part of a full production line.

This handsome decorative plate with Matisse-like sgraffito bird is signed ‘WM’. A forum friend suggested it might have been made by  the New Zealand potter Wisha McNaught who has a similar monogram with the W over the M forming two Xs. This reminded me to check my Marks of New Zealand Potters more often, given how many mystery potters turn out to be New Zealanders.

When fetching the link for this neat little reference book from Trove, I was surprised to see that it is not held in an Australian library. Published by the New Zealand Potters’ Society in 2007, it contains over 1,500 marks in a simple, easily browsable form. Luckily since I have a copy, confirming the lead was the action of a moment and I was able to contact Wisha via the Wellington Potters Society. She says it is not her work although she wishas it was!

This lidded stoneware barrel with lilac glaze, and white slip brushwork decoration to each side is, annoyingly, unmarked. We bought it from Davidson Auctions in 2010, assuming that it would have some identifying insignia, but alas, no! I really like it. The juncture between the domed lid and body is nicely done, with the looped sgraffito line binding the notched edges like string. I’m hoping someone will recognise its distinctive style.

We often buy pots from auction houses. Most provide online absentee bidding forms and many, like Davidson, now also use ecommerce services to provide a live auction facility, allowing customers to take part in the bidding process over the Internet. This can be fraught with excitement, particularly if the line drops out at the wrong moment, but can also deliver bargains if there are no other bidders.

Our auction dollars tend to go to houses that:

Although we liked the look of this piece, we bid on it only because we knew Davidson would post it if we won. Getting it home via a service like Pack and Send would have pushed the cost well beyond its market value.

Having just added a blossom jar by Janet Mansfield to our online catalogue, I decided to check what else we had of hers in our collection. Nothing, I am afraid. She is another potter whose work we either did not encounter in our years as collectors in Canberra, or could not afford. Works by her also rarely turn up on the secondary market. There are only two or three records in the various art sale digests. So we are now actively on the lookout for more pieces.

Back in 2008, we did buy this small (14 cm high) wood-fired vase with a partial salt glaze and sgraffito decoration when it was listed on ebay as by Janet Mansfield. It has been packed away in a box and I pulled it out, interested to see if it was, indeed, one of her works.

As well as editing the printed directories of Australian potters published from 1977-1990, Mansfield also shares the distinction with Janet Barriskill, Janet DeBoos and Ivan Englund of having a consistent directory presence over the years, with entries in eight of the directories. Her mark is shown in all the entries as ‘JM’ with the characters clearly separated.

In this case, the mark is quite different. The two characters share a stem. The J’s horizontal stroke extends across the M, which has a shallow middle section The closest match I have been able to find is a mark used by the New Zealand potter Jan Moresby, but as far as I can see she is not a wood firer.

Jan Moresby has let me know that this is indeed one of her works made in the early 1980s at Craft potters, Hope, Nelson, NZ, and  fired in Bob Heatherbell’s wood-fired kiln.

After writing about department store galleries a few months ago, I couldn’t resist buying this unmarked bottle with a David Jones paper label when I saw it recently on eBay. It is handbuilt, with an irregular, double-bowled and dimpled form and dark brown-glazed surface partially relieved by ash and slip glazes.  Although slightly carelessly finished at the base, it has quite a lot of gravitas.  It may not be Australian or even contemporary, but I would love to know its story. The hand-written numbers on the label imply that it was part of an exhibition. The ‘David Jones for service’ motto on the label might provide a clue as to when the exhibition was held. Or perhaps someone will recognise the style…