2012 -2013 opened with a bang with our River Music Fair, a most enjoyable event that brought the many friends and acquaintances we have made in the valley together for a day of music, art and culture, and forged our position on the Sapphire Coast gallery trail. Our Spring garden proved to be an attractive outdoor venue with the contours of the land lending a landscaped feel to the fledgling beds and trees. A hot and windy January with nearby bushfires set the garden back but it recovered and we noted a new maturity as the season closed. 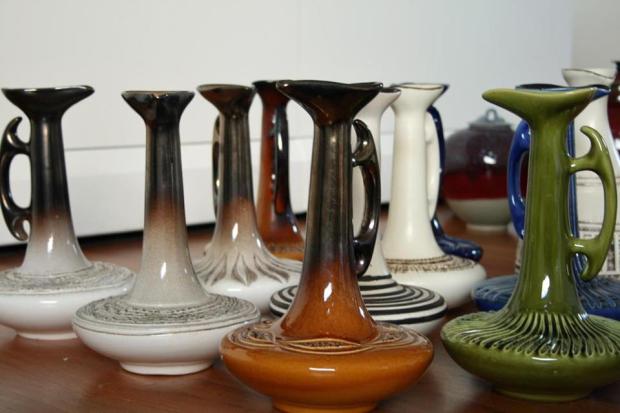 We got great pleasure setting up the Season 4 exhibition — “Mid-Century Modern: The influence of European style on post-war Australian ceramics” — and living with pieces from the 1950s and 1960s during the year.  We learnt a lot in the process, particularly about the differences in approach to modernism between Melbourne and Sydney in the post-war period, and captured our observations in a set of gallery notes.

In terms of sales, animal figures we had commissioned from Betty Mclaren — made in Merimbula in 2012 to Gus McLaren’s mid-century designs — proved very popular and so did our Arthur Merric Boyd Pottery ramekins, lovely modernist pieces in their own right and also affordable mementos of a celebrated artistic dynasty. However, we noted that visitors made fewer purchases from the exhibition itself than from the workroom shelves where pieces from earlier exhibitions were shelved.

With semi-commercial and commercial potteries like Dyson, Ellis and Martin Boyd, there is still so much available on the secondary market that it was the display of examples in a gallery context that made the exhibition interesting for visitors. A cabinet featuring brown and orange Hanstan ware was much admired but remained relatively intact to the end of the season as did our feature wall of Ellis Ceramics. Visitors were more interested in the value being placed on pieces from their own past and seeing them in a new context than in wanting to own more.

Perhaps our most satisfying visitor was The Rameking with whom we spent a half-day sharing our passion for Australian pottery and rummaging through boxes for makers not yet represented in his collection.  Appropriately amongst other finds, he took home a set of Janet Gray Royal Tour ramekins.

Our online sales really took off during Season 4 and, for the first time, we made in sales just a little bit more than we spent in new acquisitions.